Nike Capital 15k (and the Legend of the Beer)

In the early 80s someone in the Scottish had the idea of staging a road race around the bays which would attract the cream of runners from around the country. Run at the end of November, the race was over the unusual distance of 15km and was mostly flat but contained a substantial climb over Awa Road in Miramar. This should have had the effect of slowing the times somewhat. There was also a prize awarded for the first runner past the Greta Point Tavern which was located at the 5km point. The prize was a dozen beer and was much coveted by many a runner in Wellington.

The first race was held in 1982 and, even though I'd won the Wellington Dross Country Champs, I didn't fancy my chances of lasting the full distance with the quality of runners in the field. However, I did think I could beat most people over 5km and earn my refreshment.

The task didn't prove all that difficult on the first occasion, it was just a matter of hanging in there at a 15k pace and sprinting away once in sight of the entrance to the Great Point. But it still took a bit out of me and I let several people past me before regathering my faculties and deciding I could actually finish reasonable well up. In the end it was Dallas McCallum who took the victory (and the prize of a trip to a marathon in Australia) in a decent time, considering the terrain, of 45:25. I worked my way back through the field to finish second and, in addition to my dozen beer, won an electric barbeque. How useful is an electric barbeque? you may ask. I did use it, but not very often.

By 1983 a few more people had wised up to the idea that there was a dozen on offer for the leader after 5k so the runners at the head of the field didn't look so much like those who were gong to complete the distance as they had the previous year. Initially it was Pat Meffan who made the pace to Point Jerningham, then it was just Mike Gilchrist (a really good 1500 runner) and me battling it out to Greta Point. I got there in a time of 14:04 (it must have been a tail wind) and took a rest while the better runners in the field went past. Mike carried on and held out all challenges except the one from Brent Addison who overtook him just before the tunnel under the airport runway. Brent won in 46:14 and although I rallied towards the end I couldn't get past Mike, who finished three seconds in front of me in 46:30. 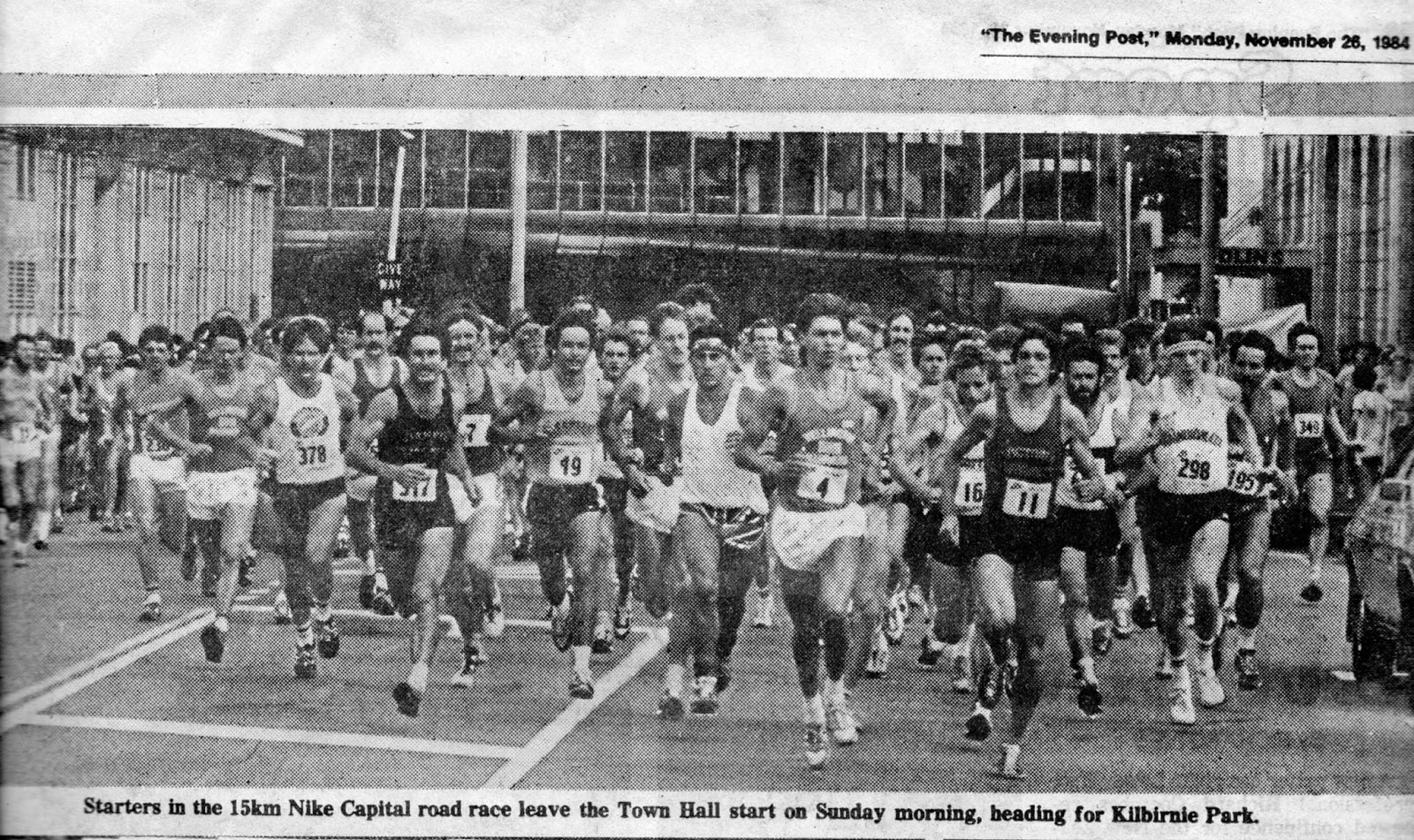 1984 saw even hotter competition for the beer. This time the major contender was Phil Barnes and we got to the Greta Point in 14 minutes, but again I prevailed. However, this time there was to be no great recovery and I finished well back. Phil held on well and battled it out with Alastair Leslie for the honours. Alastair prevailed in 45:45 after running away from Phil inside the last kilometre.

Years later I managed to anchor a team of 50 year olds home in the University Relay. The prize was a dozen beer each. There were comments made that if there's beer a stake I'm unbeatable (but this ignores the fact that there was beer at stake the previous year and we didn't win it). It's just the stuff of legends.
Posted by Mark Handley at 20:08